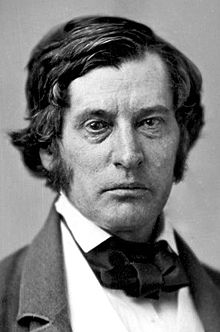 Earlier this year, the Farnsworth acquired a marble portrait bust by sculptor John Adams Jackson (1825-1879).  Born in Bath, Maine, Jackson studied art in Paris and Boston, where he began his career in the early 1850s. In 1853 he went to Florence, Italy and soon decided to move there.  He was one of many nineteenth-century American sculptors who went to Italy, where they found a centuries-old tradition of marble sculpture, high quality marble to work from, and talented stone carvers who could assist them in their work.

For Jackson and many of his contemporaries, portraiture was the means by which they established their reputations and made a living.  One of Jackson’s earliest portrait busts was of the famous American politician, Daniel Webster.  Some of his later sitters were the writers Henry Wadsworth Longfellow and Washington Irving, abolitionists William Lloyd Garrison and Lyman Beecher, and Civil War hero and former Maine Governor Joshua Chamberlain.  In 1874, Jackson was commissioned to do a portrait of Charles Sumner, shortly after the death that year of the famed US Senator from Massachusetts.  A fervent supporter of President Abraham Lincoln’s election and equally fervent opponent of slavery, Sumner is perhaps best remembered for having nearly been caned to death on the Senate floor by South Carolina senator Andrew Butler who was enraged by Sumner’s passionate speech condemning slavery.  Sumner survived and served in the Senate until his death.

When the museum acquired the sculpture it was obvious its condition had suffered over the years.  The surface was extremely dirty, had a few scratches on the head and face, and a small section of the lapel of Sumner’s coat was missing.  Examination by a sculpture conservator determined that the dirt could safely be removed and that the scratches and losses could be repaired.  The museum engaged conservator Margaret Burnham, a specialist in the treatment of marble and other stone sculpture from the Baltimore Museum of Art, to come to the Farnsworth and treat the work.  She gladly agreed to allow visitors to watch her work on the piece and to answer questions during the course of the treatment the week of August 6.  These open sessions will take place from 2-2:30 pm on August 7-10 in the Craig Gallery.

The Farnsworth is planning a major exhibition with an accompanying catalogue on John Adams Jackson in 2020 in celebration of Maine’s bicentennial.  It will be the first exhibition and publication on his work in nearly 140 years on this important figure in the development of neoclassical American sculpture.